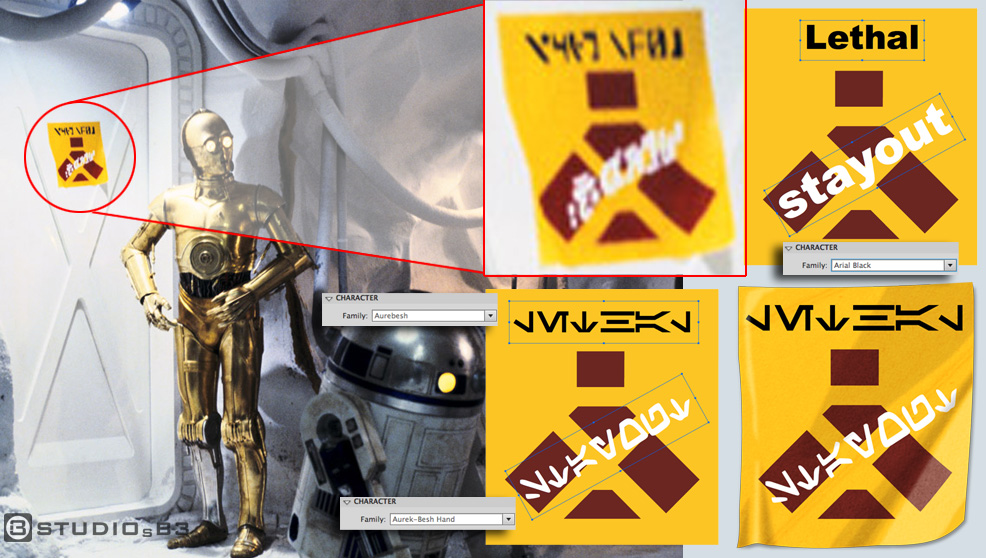 I have DREAMED about being associated with Star Wars. To a small degree, that dream came true in 2008 when I was invited to create an original, limited-edition art print for the Star Wars Celebration in Japan. Making an art print didn’t mean that I was suddenly rich and famous. In fact, it’s now eight years later and I am still VERY far away from being rich and famous. BUT, I can say that I am an officially licensed Star Wars artist, and that’s pretty cool, but I can also say that I have help to FIX something in the Star Wars movies. (see image above).

One year after the Star Wars Celebration in Japan I was invited to be one of six artists creating new designs for the on-demand manufacturing company Zazzle. All of the designs that we created had to be approved by Lucasfilm before they would be available for use on the site. Each of the approved the designs then became part of the official Star Wars Style Guide. That means that other companies making Star Wars products can use the existing approved art from the Style Guide instead of creating new art. We don’t get paid an sort of residuals for this usage, but it’s fun to see something that I made on various products.

Not every scene that’s filmed makes it into the final cut of the movie. In the trailer for The Empire Strikes Back we briefly see C3-PO rip a sign off of a door (see screenshot below). In the final film we can see him pass by the door, but he doesn’t rip the sign off like he did in the trailer. The Comic Book adaptation helps explain what’s happening. The original shooting script had several of the snow creatures (wampas) storm into Echo Base. (That super awesome wampa attack painting on the right was done by my buddy Hugh Fleming) 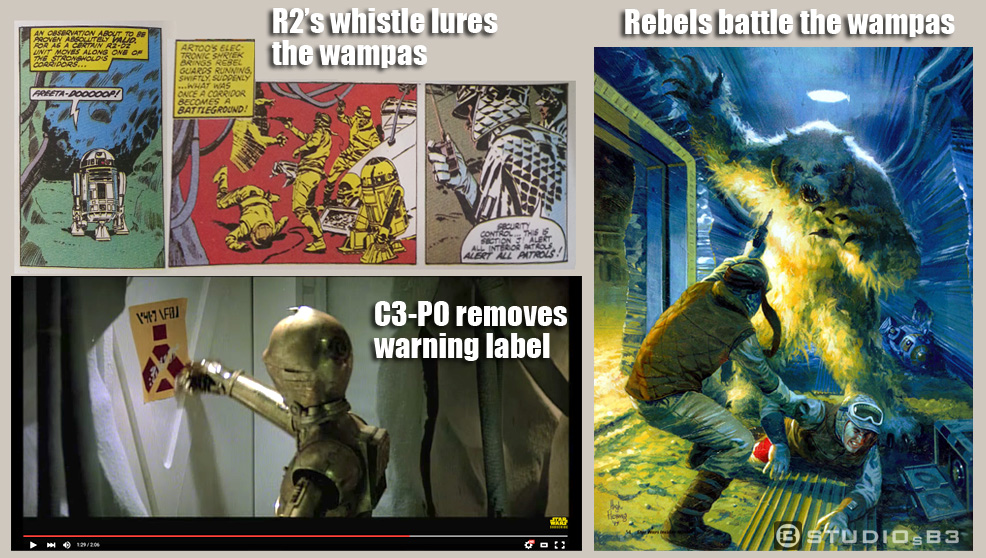 The Wampas were attracted to R2-D2’s whistles so they followed him and were trapped and captured. To keep everyone away from the captured beasts a warning sign was added to the door. As the Rebel base was overrun by the Imperial forces C3-PO walked past the door, stopped, turned back, and removed the sign from the door (seen in the trailer). Several Snow Troopers were attacked when they unknowingly entered into the room. In the video below you can see these deleted Wampa scenes and understand why they were not included.

As I was looking at this scene I noticed something odd about the sign on the door. It appeared to be written in jibberish, but that didn’t make sense because I knew that the Star Wars Universe had an official written language called Aurebesh. After a bit of research I reached out to Leland Chee at Lucasfilm. Leland’s job is to maintain the continuity database for the Star Wars universe. Here’s what he said, “The Aurebesh alphabet wasn’t defined until after the movies had been released. (The) Only reason that there is any readable Aurebesh at all is because of changes made to the DVD release (changing the word POWER on the tractor beam control to Aurebesh.) I am unaware of us ever trying to decipher the symbols on the warning sign. It’s definitely not Aurebesh.”

I wanted to find letters in the Aurebesh language that looked similar to the jibberish so that it had the same feel but make it so it actually said something. I figured that the sign should be somewhat vague so it could be used in other areas. I also thought that the Wampas were never called by their name in the film so I started to look for a generic expressions as, “Do Not Enter!” “Warning!” “Danger!”

Leland went on to point out that “…the Blueprints: Rebel Alliance book states that the symbol on the warning indicates “Lethal Hazard: DISMEMBERMENT”, though we don’t address the text specifically. On the sign, the text at the top looks like a computer font that reads: \”4(-]\F01 which isn’t much help. The white text across the symbol looks like it may have been handwritten.” I finally settled on LETHAL for the top text and STAYOUT for the white text across the logo. When it was all said and done I ordered a few boxes of t-shirts and had them shipped directly out to Florida so I could sell them at the Star Wars Celebration. 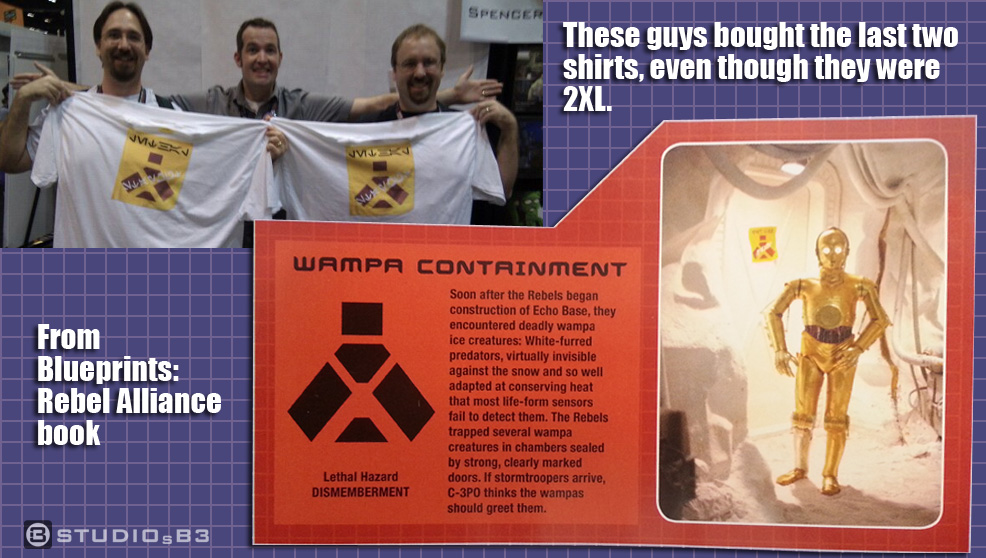 The shirts completely sold out. These two guys came up near the end of the show and wanted the shirts, but the only two I had left were sized 2XL. They bought them anyway! Two years later at the Star Wars Celebration in Germany I ran into these same guys. They laughed about the shirt and asked if I’d seen the LEGO set with my design in it. I was so SHOCKED! I knew that the design would go into the Star Wars Style Guide, but I never thought that it would have been used in an official Star Wars LEGO set! 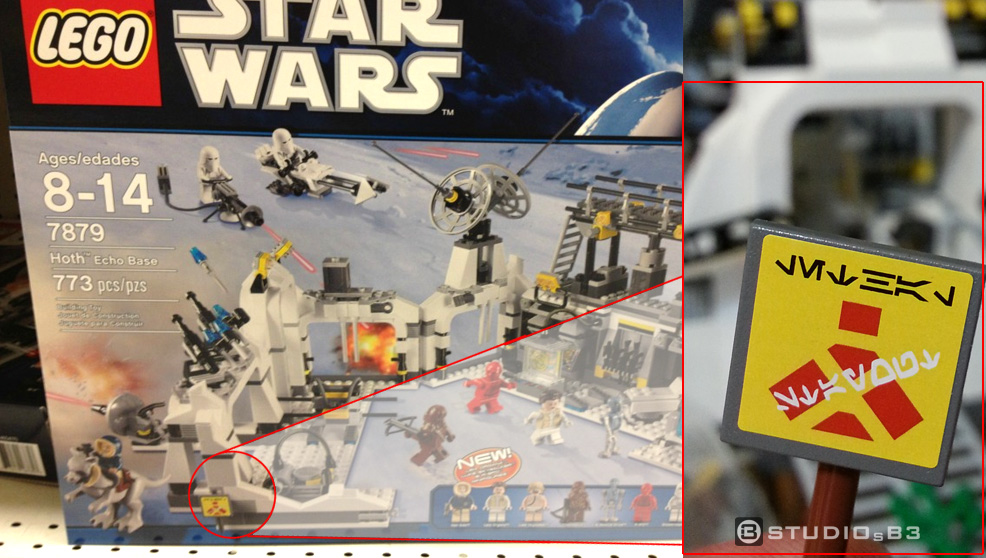 This is particularly exciting because there has been a new Hoth LEGO set that has just been announced that will once again include the sign that I helped to create. 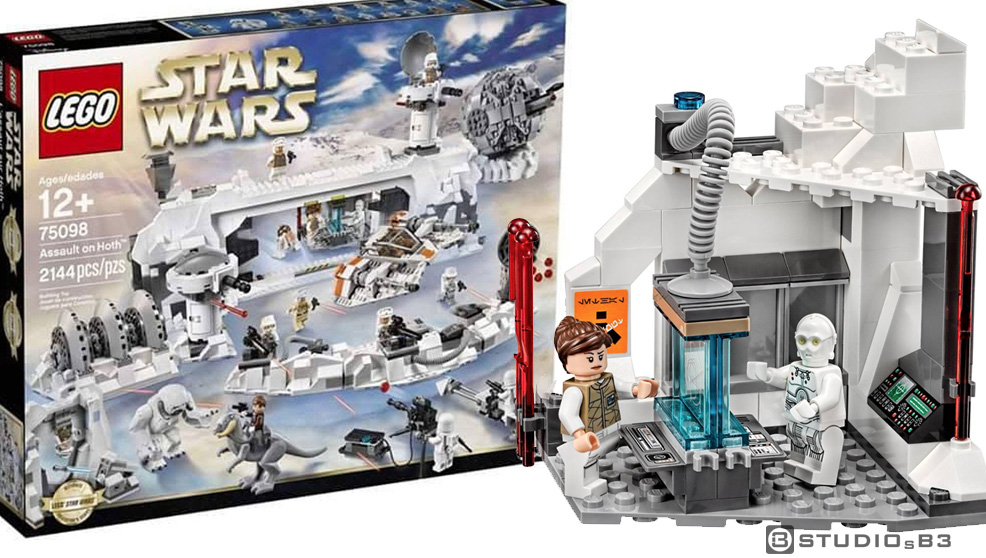